I woke up at 4 am to a rocking boat, wind whining through my mast, wind rattling my blocks, wind trying to blow into my cabin. It was billowing out there. Knowing sleep wasn’t going to happen, and that I love being up at 4 am anyway (not sarcasm), I got up and made myself my morning coffee and watched the day blossom into a storm.

What’s great about sailboats is how they were designed to cut through the water. I watched outside as  choppy waves passed my girl, and the boat hardly moved. When the sails are up, and she’s being pushed or pulled into the wind, I never feel the waves at all–Libby digs into chop and glides. That’s what they’re supposed to do. A wake from a powerboat will get her rocking (I hate powerboats), but not much else will do it. So while the waves were pretty icky, the movement wasn’t bad.

When there was enough light to safely get into the dinghy and head to shore, Riley (wearing his life vest) and I piled in, released from the stern, and drifted about 200 feet before getting the outboard started.

A brief aside on the outboard. Days previously we were heading into shore for our morning routine of Riley potty time and Courtney kickboxing time. When we came into port, we also came into a huge gathering of jellyfish. I’m not exaggerating when I say there were thousands or hundreds of thousands of them. I’d never seen so many of them, all bunched and huddled together, a solid mass of jelly. As we closed in on our dock, the outboard vibrated in my hand, something it had never done before. A few hours later, as I was chatting with my neighbor, I discovered that one of the propeller blades had come off. Great. Thanks jellyfish. To balance out the motor to keep it from jacking itself up, Jonathan sawed off the other blade.

So I had a half-powered outboard in the wind storm. There. Go ahead and sympathize with me now.

The wind was blowing from the south, which usually means the weather is going to bring rain and more mayhem. We were going with the wind into shore, so Riley (who loves hanging off the side of the dinghy and thus, had to be held into it to prevent him from being popped out of it) and I rode the rocking waves into port, tied up, got on land, and watched the chaos unfold.

The first thing we did once on shore was run and help a huge powerboat dock. Powerboats are not great in windy weather, simply because they’re tall. A sailboat, even an enormous one, is short. A powerboat is built to plane and float above the water, skipping off the surface. So when wind hits it, the boat goes everywhere. We helped the powerboat in, pulling on the docking lines and then tying her down, then I looked up into the bay and saw not one, but two sailboats skipping across the bay, which is to say, they were drifting, heading north because the southernly winds were pushing them into the shallow end of the bay.

One sailboat was a Catalina 36, owned and lived aboard, but currently unoccupied. Its resident quickly jumped into his 3.5hp dinghy and went after it.

The second sailboat was a Columbia 36, for sale and totally empty, its owner a whole state away. My fellow liveaboard, neighbor, and sailing buddy Jonathan, went to the rescue after I pointed out with mild curiosity that the boat was drifting. I know he went to the rescue because, as Riley and I were on the end of the pier, looking at our own boat (which wasn’t moving) Jonathan went blazing by in his dinghy, wearing an inflatable PFD.

Riley and I went to shore. Poor guy had to do number one and two. So there we were, safely on land, watching both the Catalina 36 and the Columbia 36 getting closer and closer to land, skipping across the bay, with one man aboard each, trying to save the boat. I really wished for a pumpkin spice latte and a snack. This was good stuff.

Then it got better.

Winds picked up to 30 knots. I saw white caps. Oh baby. I watched my boat turn its bow into the wind, then watched the mast against the hill line, making sure the mast didn’t move one way or another. It didn’t. Then I watched the owner of the Catalina 36–still struggling–and then saw a seaplane coming in for a landing. Jonathan was grappling with the Columbia 36, and as the seaplane made its descent, I couldn’t help but notice its close proximity to my neighbor as he tried rescuing someone else’s boat. This was the absolute worst time to be without a donut and coffee. Man.

So the plane lands. Seaplanes land into the wind, helping them come to a stop. The wind was so strong, it looked like it took about twenty feet for the plane to stop and start drifting backward. It also landed freakishly close to Jonathan in the Columbia. I wondered about the state of his underwear, sure he’d soiled them. Because I would have.

Meanwhile, some yuppy couple with luggage headed down the gangplank and waved like Richard Nixon to the seaplane. Oh yes, these people were planning on going somewhere, and were so moronic that they thought they needed to flag down their pilot, perhaps assuming that the pilot didn’t know they were on shore? It takes all kinds of folks to make this world interesting.

Both the Catalina 36 and Columbia 36 got under engine power, and started heading into the docks. Riley and I dashed down to help Jonathan tie up the boat. Once we started tying down the lines, Jonathan wowed the crowd (there were 4 of us helping hold the boat steady) with his thrilling tale of almost being crushed by the seaplane, which I could corroborate because I saw the plane land close to him. Once the boat was tied, he hopped off and looked into the bay for more mayhem. I said if I’d known he was going to save the Columbia, I would’ve helped. It would’ve been a cool story to write about for my blog. I’m always putting the entertainment needs of others above my own. I’m selfless like that.

The seaplane was trying to inch its way closer to shore to pick up the yuppies. They were still determined to fly, even though two sailboats–which should handle wind quite well–have lost their grip on the bay’s bottom, and the wind was so violent the port was loud with the sounds of halyards clapping, whistling hardware, and waves slapping against hulls. What a day to fly.

The seaplane turned on its propeller to inch closer, then killed the engine to drift. The pilot turned on the engine, drifted and killed the prop a few more times, and managed to get pretty close before the wind spun the plane around in the wrong direction. The seaplane kicked on its engine and headed out into the bay, and if I could guess what the pilot was thinking, I’d say it was something like “Eff this.” He put more space between himself and the shore.

The yuppy husband came up to the group of us (watching all of this unfold with glee), and made a request: “Can someone with a dinghy take us out to the plane? He can’t come into the docks. I’ll pay someone to take us out there.” My vivid and dark imagination put together a scene that went a little something like this: The yuppies, with their luggage piled into a dinghy, head to the plane. It’s windy. It’s dangerous. The plane is powered by a spinning propeller, a marvelous invention. The wind, as it so often does, changes directions. The plane turns as a yuppy is trying to board, and the spinning propeller comes around. An arm flies off. Maybe a head. The water is stained red, the canary yellow plain splattered with blood. There’s screaming.

Don, another liveaboard, volunteered to take the couple to the plane. Don is elderly, has an old yellow lab with pink painted toenails (I’m not making this up), and a decent sized dinghy. He left our watchful gathering to go make some bucks. Jonathan and I looked at each other.

“We need snacks,” he says. This is why we get along so well and make great neighbors. I commented that I’d maybe risk taking these idiots out to the plane for no less than one thousand smackers.

The betting begins. Do they make it to the plane? Does the dinghy capsize in the wind? Does someone lose a limb? Will the plane takeoff? And man, we need coffee and donuts.

Don, the yuppy husband, the yuppy wife, and Don’s yellow lab with pink painted toenails, head out to the seaplane.

I looked over to make sure Libby hasn’t moved. She hasn’t. Phew.

Don miraculously made it to the seaplane, who has wisely cut his engine, preventing his would-be passengers from losing any of their limbs or heads. The first pass is a no go. The seaplane drifted north, and Don made another pass. Then I see the couple ambling onto the plane and Don comes back to shore. Success for Don. I asked Don how much money he made, and he replies that the husband offered him twenty bucks (to risk his life and limbs) but Don turned him down.

“Do you think they’ll take off?” Jonathan asks.

They do. The plane started its engine and it cleared the bay, taking off into the sky. I’m assuming the yuppies made it to their destination safely, but am also sure that the pilot mocked his passengers to his fellow pilots. The waving was so pathetic.

The wind died down a bit, but was still billowing, around 20 knots or so. I stood on shore to watch my boat do absolutely nothing, which is what I love. The rest of the day was uneventful, which is good thing. Everyone was safe.

I’m new to boating, and have anchored about ten times or so. You’d think my boat would’ve drifted, seeing as how I have little experience dropping anchor. And yet, two bigger and heavier boats, anchored by men who’ve been doing this for much longer than me, lost their boats into the wind and I did not.

My anchor is a Danforth, weighing in around 25 pounds, held with chain to the rope rode. Where I’m anchored is probably around 16-18 feet deep at high tide. I have around a seven-to-one ratio of rode let out, so the anchor can have its proper angle. I also have a sentinel, a 25 pound weight (it’s just an old laundry detergent container filled with cement, held onto the anchor rode with a steel loop), which my friend Ron gave to me, calling it my “sleeping pill.” The sentinel pulls down on the anchor rode, giving the anchor the angle it wants to dig into the mud. The more the boat is pulled by the wind, the deeper the anchor digs. Even in wind gusting at 30 knots, Libby didn’t go anywhere. 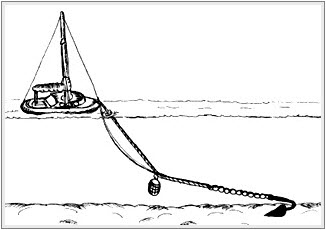 How a sentinel works

That night I lost sleep not because I was afraid the anchor would pull up, but from the noise. The blocks rattled, the halyards slapped, the wind whined. I “slept” in my main cabin, not the v-berth, because it was much more stable and hardly moved there. The rocking boat didn’t bother me, but the noises from the wind certainly did. Riley and I were tired the next day, but oh so glad our boat and home didn’t run aground.